It’s the middle of a rather mild winter and although I’m enjoying the warmth it’s a bit of a worry. July was once freezing wasn’t it? But I digress. I’m here to offer my favourite works of art for the month not reminisce about the good old days where a Saturday night in Newcastle was spent wandering the night clubs, freezing in the latest fashion, searching for that elusive fun. I’m mentioning this because just a couple of weeks ago I was walking through Devonshire Lane thinking about the cool cafe from the 80’s that was somewhere in the vicinity. Well I took a few pics of what I thought was the old cafe (now rundown and out of business), made an Instagram post and sure enough it was the old haunt. It seems Kurt’s was many a Novocastrians place of choice for a midnight toasted rissole sanga.

Kurt’s! It’s a work of art in itself really.

So to the art!

The Wetlands offers a stunning view of estuary and wildlife so add to that an exhibition  in their gallery and you have the perfect place to meet up for a coffee and chat in their cafe. Perhaps it’s on the locals to do list but honestly it’s just not a spot I ever get to. But that must change! I found myself there early in July at the opening of Overwintering Revisited, a group show including the Newcastle Printmakers and the Hunter Sculptors. I’ve been delving into the ever expanding realms of screen printing this year so really appreciated Suzi Zglinicki’s gnarly tree. There’s a simple element to the scribbled line giving it a youthful energy. And sticking to the plant world I thought Lynda Gibbons’ waratah was superb. I noticed her work was a feature in the art page of the Newcastle Herald recently so things are happening for this local artist!

I have to mention Charlestown Library too. It’s not where you’d expect to see art but over the past few years they’ve been allowing local artist’s to exhibit. As far as sales are concerned I wouldn’t expect it to be a huge hit but for those just wanting to put their work out there it’s not a bad spot. They’ve recently renovated the space but basically the exhibition space has just moved from one end of the library to the other. I was pleasantly surprised to see some abstracts recently by artist Janet Tymmons.

Ok so up until now I’m only into the first few days of July and I’m letting out a long sigh this very minute. As much as I’d like to include every gallery I ventured into in July it’s just too many. So I’m reigning myself in (in actual fact I just do not want this blog post to go on and on).

Now with that, possibly irrelevant, bit of info out of the way I’ll mention the Independent Galleries Newcastle (IGN). I had the pleasure of being a part of this fun 24 hours this year volunteering my assistance to help the Newcastle Printmakers set up their site. As a result I was able to hang a screen print of mine. And what’s fun about that is I can now say I’ve been hung at a regional gallery. Yes I’m having a good chuckle but it is true (insert a shoulder shrug here). On the whole though it’s a great endeavour planned by Ahn Wells that offers a platform for local artists and galleries to exhibit their work all in one space.  I really enjoyed the art available though I restrained myself and didn’t break out the wallet. 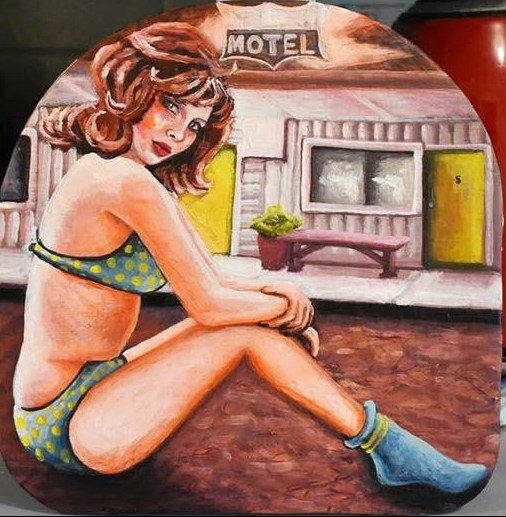 Elle Kauffman’s painting presented by  ASW  at the IGN.

The same weekend the Newcastle Grammar School held their annual fundraising exhibition Nexus. I have to say I was a little disappointed with the quantity of art on exhibit this year in particular the lack of sculpture. I remember sculpture being a significant section but this year it was almost non existent. The work  was excellent regardless and the view from the classroom is awesome. So I’ll continue to attend and hope that sculpture resurrects itself.

Art at the Nexus exhibition by artist Linda Greedy. This intrigued me in part because it seems so different from her previous work.

Also worth including this month is James Drinkwater’s exhibition at the Newcastle Art Gallery titled “the sea calls me by name”. I perused this exhibit a couple of times and I admit I’m a sucker for this Newcastle faves work. It’s the texture and tones and its relative shamble of shape and line.  I admit to not trying to work out what he’s trying to say and just enjoy it for its pleasing aesthetics. But on my second visit I came across my son and his friend, both in their twenties, and they looked confused. They were trying to work out what the artist was trying to convey. Obviously they were not satisfied with its pure artfulness as I am and alas I don’t think I convinced them.

SO that’s it for the month of July. Follow me on Instagram @the_layman_reviewer to see more art I’m watching.

Have a great August!