It might be a little controversial but I’m looking forward to the expansion of the Art Gallery of NSW. Yes it already is adequate and it does seem rather unfair that they’re being thrown large buckets of cash when our poor Newcastle Gallery can’t seem to find a way into the hearts of the pollies but what can one do. So let’s just embrace the inevitable and look forward to that time when more of the big blockbusters come to Sydney. I’ll be welcoming that train journey. At the moment though a mini blockbuster has just opened at the AGNSW and one that enticed me down that way on Monday.

I’ve been looking forward to the exhibition Making Modernism since I stumbled across the catalogue at my local library earlier this year. I’m relatively familiar with Margaret Preston and Grace Cossington Smith, the 2 Australian artists featured in the show. But it was the work of Georgia O’Keefe I was really keen to see. I’ve been aware of her work, particularly her paintings of ram’s skulls, for many years now and always found her appeal curious. I’m not sure that the exhibition clarified this appeal, however that seems a moot point. The life story of this artist is as intriguing as her art and I never tire of learning more. I guess it’s the act of leading a solitary existence content with her determination to represent the love of the land of New Mexico on canvas and explore abstraction. It’s understanding why many of her works were suggested to have a sexual imperative with the close up of flowers quite soft and indicative of female genitalia. But from the short video about her that concludes the exhibition it seems this was not her intention. She is described as a prickly kind of character so the desert perhaps invited respite and a sense of calm. For me this is the feeling I gather from her paintings.

Many of the paintings by Georgia O’Keefe were sourced from the museum dedicated to her in Santa Fe, New Mexico. 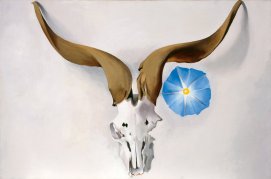 The ram’s head images that I’m most familiar with.

The bones of the desert were a regular feature in her work from her New Mexico ranch.

This is an intriguing image of the scenery while O’Keefe was sitting in a boat. The foreground is actually her knees.

Canna Leaves 1925. O’Keefe cultivated her own plants so studying them became fundamental to her practice. 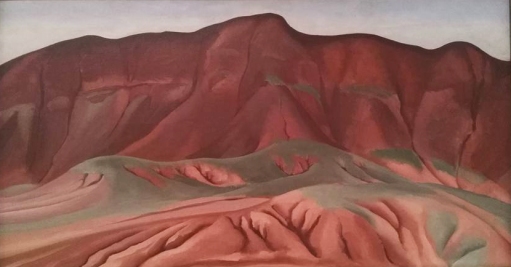 Her beloved hills near Ghost Ranch.

There are many paintings brought to Australia from The Georgia O’Keefe Museum in Santa Fe New Mexico.

The solitary life was also enjoyed by another of the artists in the exhibition, Grace Cossington Smith. Living in what was once the rural Turramurra, over a lifetime she described the landscape and her home in her very distinct style. Employing the principles of Arthur Wesley Dow (it’s to be remembered that O’Keefe was a student of his) who said the ultimate purpose of art was to ‘fill a space in a beautiful way’, she also went on to paint the construction of the Sydney Harbour Bridge. The bridge has never looked so resplendent.  Seeing the array of subject matter that Cossington Smith mastered was one of the highlights of the exhibition for me. I have seen many of her works but to see them all in one place brought home why this artist is so highly regarded, at least in Australia. Some of her work that I’d seen in print and dismissed as insipid became alive and unique in the gallery. Three such paintings were achieved on a holiday to the south coast to recover from the loss of her mother. Sea Wave 1931 recounts the detail of rolling waves and the immensity of the sky with her technique of small daubs of high key tonal paint. Too many of her works became favourites for me in this exhibition.

The three paintings by Grace Cossington Smith finished while recovering from the death of her mother in 1931 on the south coast of eastern Australia. Beneath are paintings from her life in Turramurra, Sydney. 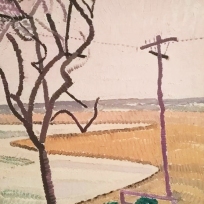 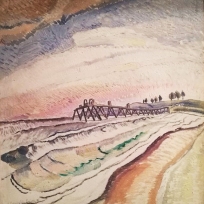 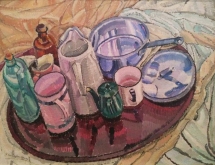 For me the minor artist of the exhibition became Margaret Preston. This of course was not the case before I hopped on the train on Monday morning. I’ve always loved the work of this great icon of Australian art particularly her paintings but when cast alongside the work of  Cossington Smith and O’Keefe hers appeared decorative and achievable. On entering the gallery it’s Preston’s paintings that welcome you with their vibrant colours and exquisite painterly character. And I still love them, perhaps even more. But there’s a contrived representation of objects about them that doesn’t seem to occur with the other 2 artists. Maybe this is why Preston is renowned primarily for her prints. They may be more progressive in the realm of the art world. I guess if I read more about her I’d find out but I can’t guarantee that will happen. Not when the life of the others is much more beguiling. Preston was a somewhat more communicative specimen regularly writing about art and her adventures. I read a page of her work in an early edition of Art and Australia at the exhibition where she emphasised the importance of finding a distinct style of art for place. Which is why she delved into the study of Aboriginal art and adopted some of their techniques. I might add she is highly criticised for this, though for me these works in the exhibition are of interest for the colour and, funnily enough, technique.

Margaret Preston’s beautiful still life paintings. It was a treat to see so many on exhibit. And below the Aboriginal inspired landscapes. 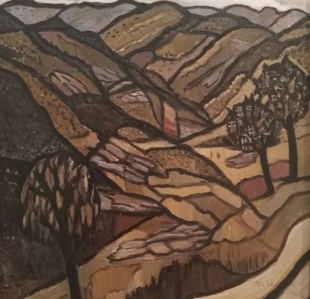 I was going to include some of the other work I found fascinating about the gallery here also but I think I’ll leave that for another post. Needless to say there is some great contemporary work happening in the gallery. A giant sculpture of Captain Cook is fantastic and poignant and one to look out for even if you don’t like art galleries.

But for now that’s me over and out.